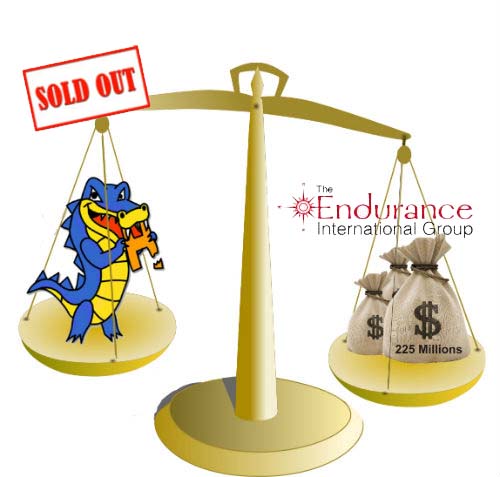 One of the biggest news circulating over the internet from last three days, most especially the webmasters, is the acquisition of Hostgator by Endurance International Group. EIG acquired Hostgator at $225 million USD. This was the rate offered by Mr. Hari Ravichandran, CEO of EIG which was hand on accepted by the CEO of Hostgator Brent Oxley.

If you have already purchased Hostgator Webhosting services, below are some posts which you might find helpful.

Not much people knew about EIG (Endurance International Group) before this news. This big business group has become grand after acquiring one of the most popular domain registrar and web hosting company. EIG is a very big business group which includes some big companies like VPSLink, Bluehost, iPage, and Fatcow. After cracking this grand deal, EIG would likely get a firm hold in the webhosting market as well.

Although EIG run quite a few webhosting companies but only Bluehost is leading well in the market, rest all are just burgeoning presently. But now after acquiring Hostgator, EIG has gained worldwide publicity.

Is This Acquisition Good or Bad for Hostgator customers?

How do you think will this acquisition turn up for the Hostgator customers? I feel it might bring some good as well as some bad points for us. Good point is that being a financially strong company EIG may provide better and improved web hosting services and support. EIG is already known for its great support and facilities.

Bad news is that future of all our websites hosted on Hostgator is uncertain. What I understand by this acquisition is that all our data hosted on Hostgator will now be moved on a different location and some unlucky webmasters among us will definitely lose their websites in this migration.

I read somewhere the CEO of Hostgator Brent Oxley stated that complete acquisition including the data center migration will be executed in some 3-4 weeks. The statement by Mr. Oxley further said that Hostgator will sign a lease agreement for Texas and Houston data center.

These announcements actually show that the companies are planning to expand the infrastructure magnificently once the Hostgator is sold completely to EIG.

What I would suggest to my blogger friends is to have a daily backup of their websites as they might face any disaster during the data center migration by the companies. There are quite a few trustworthy ways to get the backup. I, myself am using the cPanel backup of Hostgator. Check out the one which suits and have your blog backed up.

Letâ€™s see what this deal brings next for the webmasters using Hostgator for their websites. What is your take on this huge acquisition – do voice your opinion via comments below.