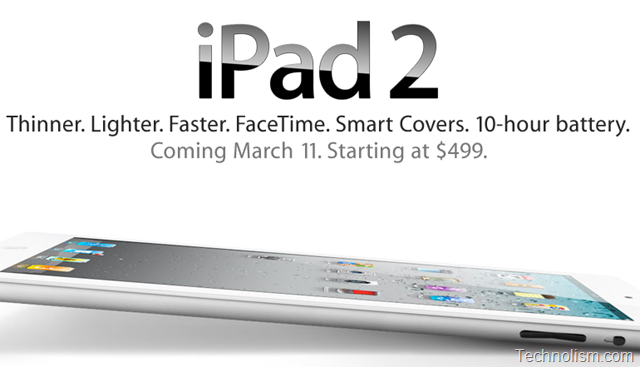 As we expected the next version of the iPad to be announced at the March 2 Apple event, Steve Jobs today revealed the iPad 2 at the San Francisco Media Event.

We covered the features of the iPad 2 already. Amazing product. Faster, lighter, thinner. Cameras and gyro. iOS 4.3 and FaceTime. iMovie and GaragrBand. 3G on AT&T and Verizon. Same battery life. Same prices. Black and white. Smart Covers. This is what summarises the iPad 2. 😉 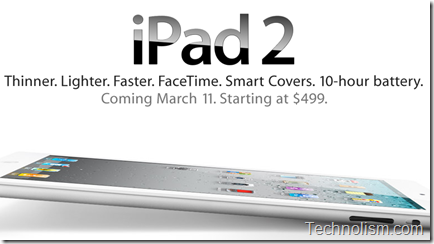 The best part which comes along with the iPad 2 new features is the pricing. The price is not changed and remains the same as its predecessor, iPad 1. Same is with the battery power also.

Below are the pricing details for the iPad 2:

Now, the interesting part is the actual date when it comes available to the users, the shipping date. Surprisingly, the shipping date is not delayed at all and Apple will start shipping from March 11 in the US. Generally, it is a few months after it is revealed in such an Apple event.

It will start shipping in 26 other countries from March 25th. The 26 countries are:

As expected, India is not in the list of these 26 countries and we will have to wait a bit longer when it is officially launched in India. If you are interested in iPad 2, you will have to import it or buy it from eBay 🙂

I am loving the new features of this mighty device and interested in buying the 32 GB 3G+Wi Fi version. As I am currently in the UK, I am looking forward to having a hands-on when it is officially launched here on the 25th March 😉 Which one is your favourite 🙂

Also Read:Â iPad 2 is finally hereâ€¦ Check out the Features