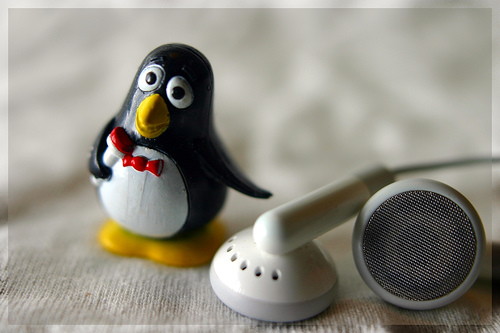 Rythmbox is a fully featured audio player and embedded into Linux and it is motivated by the Apple iTunes approach and its concept. It provides various options such as the user can categorize the music according to the album last played and the most recent track played. Which eases out the task of the user to listen to their favorite audio in a single click. It is free as well as a strong – thanks to the GStreamer media framework it provides. Using this player, user can burn their favorite music tracks on to a CD and other media as well.

As the name itself implies, Listen is an audio player which is preferred by many users because of its user friendly nature. It also has a media guide and a music library in which user can download music online and update music form the system in which is installed. The various supported files it can play are: wav, mp3,flac,wma, mp4 and rmv.Â It also offers straight forward access to the lyrics which are available online.

This audio player is supported by many platforms. It is motivated form the approach of Amarok. It provides several interactive options for the users.Â It has a feature that can get hold of the lyrics as well when a song is being played and users can also add music from different categories into the music library. It supports various music file formats and as mentioned above, Clementine audio player is compatible across various platforms and supports Mac and Windows machines as well.

Quod Libet music player and its manager are written using Python as python is useful for writing scripting as well creating applications.Â It organizes music in an entirely different manner which other players fail to do. It has a music library which gets updated automatically when new songs tracks are added. It supports many types of music file formats. It is fully feature rich and provides many options like editing tags of the music files which the user wants to play.

It is multi platform audio player and is supported by MacOs, Linux, Ubuntu and Windows as well. It provides very powerful features and is a perfect audio player for music lovers using Linux platform. It is very user friendly and proves successful in providing the music experience which you may have not experienced in a long time.

The various file formats it can play are: wav, mp3, flac, wma, mp4, flv, 3gp and rmv. It also offers straight forward access to the lyrics which are available online and users are able to view them as the song proceeds.

Google Drive and Its Comparison With DropBox, SkyDrive, Box.Net & SugarSync

Google Drive Cloud Sharing Service to be Launched Next Week