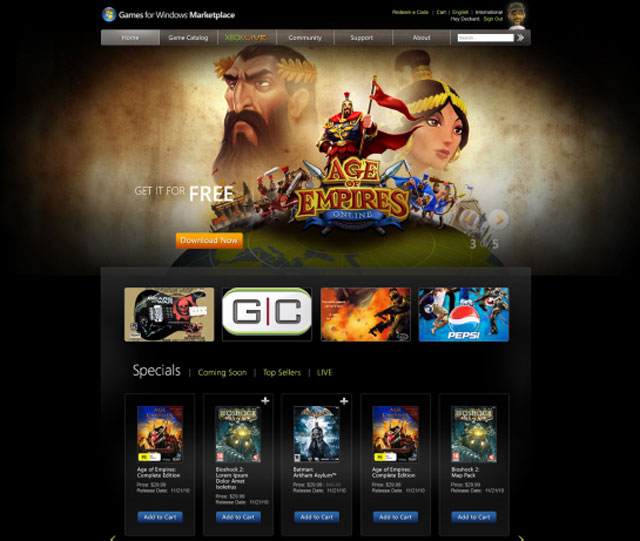 As announced by Microsoft, the Software giant is all set to launch “Games for Windows Marketplace”, an online store that will let users buy digital copies of games directly from their browsers.

The key features that this store boasts of are â€œultra-fastâ€ downloads, search (by titles or by genres), clean navigation, and deals and discounts, including â€œDeal of the Weekâ€ and other recurring and seasonal offers, besides online access from any computer.

It gives its users, the facility to purchase games with their Microsoft Points or a credit card from the ease of their browsers.

The “Games for Windows Marketplace” is a browser-based version of Microsoftâ€™s Windows “Games on Demand” store, which is a part of its Games for Windows Live online service. By placing the store in a browser, Microsoft eliminates a couple of steps needed to purchase a game.

â€œWith Games for Windows Marketplace, we set out to create a digital store built for PC gamers end-to-end. And by integrating with our existing Xbox LIVE and Windows Live services, weâ€™ve made it easier than ever for millions of gamers to see for themselves how easy buying PC games can beâ€, said Kevin Unangst, senior global director of PC and mobile gaming at Microsoft.

When the Games store gets launched on November 15, 2010, there will be about 100 games available at the store, including Grand Theft Auto III, Dead Rising 2, Lost Planet 2, Max Payne, Deus Ex: Game of the Year Edition, Flight Simulator, Gears of War, Halo, Zoo Tycoon, Fable III, Age of Empires Online and Microsoft Flight. So, it is going to be a treat for the Games Freaks 😀

What are your thoughts about this feature from Microsoft?

What will happen to Apple if Steve Jobs leaves? [Infographic]

All you wanted to know about Drupal [Infographic]