This report is coming a bit late for this month as I went for a trekking trip to the Ben Nevis which is the highest mountain peak in the whole of United Kingdom, and is at its scary best in winters ;). I was so tired and exhausted after the trip that I literally did not get any time after my full time job to sit down and write :(.

Another good thing for this month is that the Bounce rate has come down from 81% to 73%, which is not that great but compared to last month it looks much better.

Like last month, the main traffic source on Technolism continues to be Google Search Engine which is a good thing. In addition to this, Technolism has been able to pull some traffic from Social networking sites like Facebook and Digg; Twitter is still missing though. 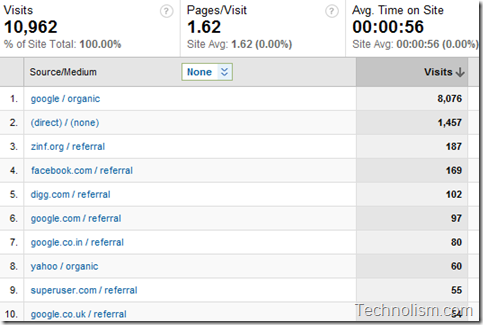 As you can see, there has been a considerable rise in the organic traffic that we are getting from Google. I will try to maintain this progress having lost almost half a month because of the trip I had at the start of the month 😛 (Well, thatâ€™s an excuse from a lazy blogger!!)

How are the traffic stats for your blog for the month of January? Do share with us in the comments section below.