This location feature of Facebook is being rolled out to the UK users gradually, which means that it may not be available to everyone immediately. To check if you have been lucky enough to get the access, you may try tapping on the Facebook Places option on your Facebook for iPhone app, or on Facebookâ€™s mobile site touch.facebook.com. For the rest, it will be rolled out over the next couple of days. 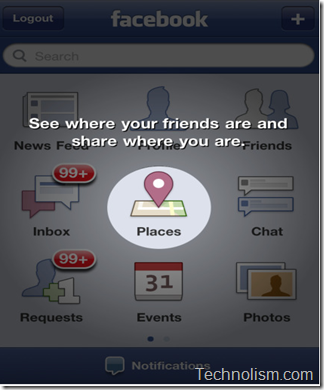 For those who do not know what Facebook Places is, it is a simple Facebook feature that lets you check into real-world locations through your Facebook profile, similar to the functionality offered by services such as Foursquare and Gowalla. It allows you to see where your friends are, and share your location in the real world.

Must Read: How does the new Facebook Feature “Places” Work?

Facebook privacy around this feature is a matter of concern on which Facebook again pointed out that the users have full privacy control, and that checkins are defaulted to friends only, unless, you have manually set your privacy setting as â€œeveryoneâ€). Also, minors will not appear in posts or checkins to anyone except their friends, and users can remove any checkin from their phone or the web.

I think Places is an awesome feature from Facebook and adds more interaction to your Social Web presence. How are you using Facebook places? If you have not yet experienced Places, point your browser to touch.facebook.com and see for yourself now. Share your views in the comments section below. You may also like to watch our Video Tutorial post on How Facebook Places works?